Please note that this is an #AMAatHome / #AMAenCasa exhibition, and will be on view online only, not in the physical museum.

Dialog: Mystery of the City of Aphrodite, Paphos and Into the Lands of Horacio Quiroga
Rimer Cardillo & Jani Konstantinovski Puntos
July 8, 2021

The Cyprian city of Paphos on the island of Cyprus, where several temples of the ancient cult of Aphrodite are located, and the Jesuit Mission of San Agustín in the Argentine Province of Misiones are two physically distant places that are nevertheless conceptually and mythically connected by the artistic works of Jani Konstantinovski Puntos and Rimer Cardillo. Both artists invite the viewer to stroll through the respective cityscapes with a historical perspective and become fully conscious of the fact that people of past civilizations and cultures once walked through these same spaces. Awareness of the past, while inhabiting the present, generates a dual consciousness of time and space, here and there: in the same instant, time converges from all directions, enhancing and encroaching on our own sense of belonging.

Puntos’s conceptual work The Mystery of the City of Aphrodite, Phapos presents the archeological sites, excavations and ruins of the ancient city from the perspective of the contemporary architecture of present-day Paphos. From the multi-level concrete buildings of today to the multi-layered stratus below the surface, where former civilizations once occupied the island or parts of it, Puntos emphasizes vertical historical connections in the cityscape. 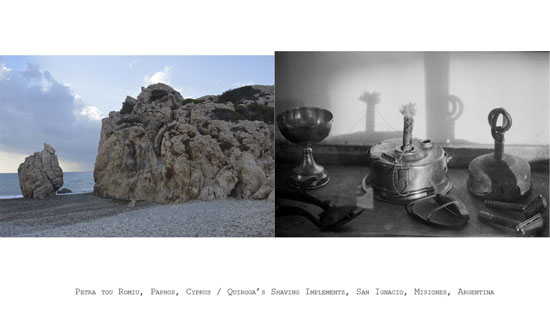 As Puntos conceptualizes in his artist statement: “The Mystery of the City of Aphrodite, Paphos (the actual city of Paphos), the remnant son in the ancient world, made a great impression on me. Viewing this archaeological world from the position of modern architecture of Paphos encourages direct participation in it. So we enter the world untold. We stroll through its outer layers formed during different historical eras, moving through time and space, dually important. Her (the City of Aphrodite’s) story was enclosed in my consciousness. It is also the historical context that refers to the 1970s, when the 'island' was divided into two parts, independent of one another.” These concepts form the foundation of Puntos’s understanding of the dual consciousness of the contemporary cityscape, which involves historical knowledge and mythical connections as well as an awareness of Cyprus’ national divisions.

Conversely, Cardillo’s conceptual work Into the Land of Quiroga emphasizes horizontal connections in the cityscape of the San Agustín mission. He views this national landscape through the eyes of the modernist Uruguayan writer Horacio Quiroga, whose narratives punctuated the Jesuit mission ruins surrounded by an exuberant and invasive vegetation, a great diversity of wild animals, and the presence of Native American peoples and the european, creole, and mestizo settlers who displaced them. By retracing Quiroga’s footsteps into this Argentine Mesopotamia and visiting and photographing Quiroga’s estates, Cardillo highlights the technological advantages that Quiroga brought with him to Misiones from Buenos Aires. Among the items Cardillo captures with his camera are Quiroga’s motorcycle, his tools, his camera, and his library of literary and technical books and farming calendars. By highlighting this technology, Cardillo emphasizes the horizontal historical connections as well as the social and cultural confrontations of San Ignacio. Cultural clashes that started with the conquest, and that Quiroga portrayed in his short stories, are still alive today, generating death among humans and animals, as well as environmental degradation. 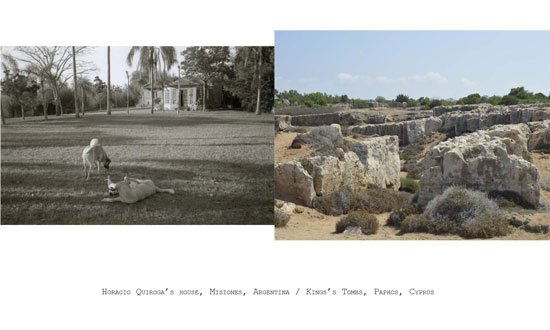 As Lucy R. Lippard notes in her essay: Contact Zones,Travel and Archeology in the Work of Rimer Cardillo: “Travel, especially travel to a homeland, or into the past, can be a quasi-ritual experience. As in ritual, the baggage may be determined by the past, but the voyage itself is always subject to living change.”

“The artist as traveler and collector of flora has a long history. In this context, the expeditionary and survey draftsmen and photographers come to mind. Perhaps Alexander von Humboldt - whose voyages to Latin America at the turn of the nineteenth century have been seen as a point of departure from a pan-American consciousness-has been in the back of Cardillo's mind as he makes his own voyages." 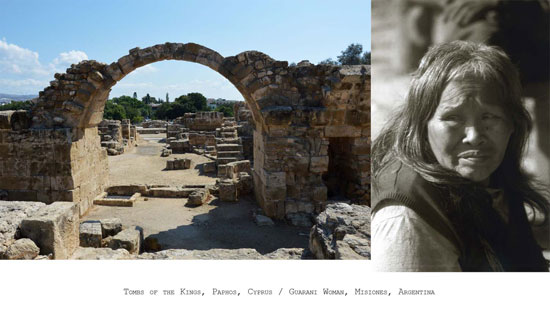 “There is a consistently problematic political dimension to traveling and observing "other" cultures and their remains. Even when the interaction is apparently unbalanced in favor of the visitor, those visited also have their own expectations of how "others" should act. Cardillo is aware of the pitfalls.”

These two places, Phapos in Cyprus and the Mission of San Ignacio in Argentina, are geographically distant but historically connected by the role that each played in the formation of civilizational unity and the nationalist fragmentation of that unity. The ancient City of Paphos, where the Mystery of the City Aphrodite was once enclosed, was intrinsically connected to the ancient City of Alexandria in Egypt: each was a hub of technology that marked a specific time. Technological advances developed in these ancient cities, aiding civilization through the centuries, enabling its movement from east to west via the Mediterranean Sea. The waves of the Mediterranean eventually reached the American coasts, bringing with them institutions, social stratification, slavery, capitalism, organized religions, liberty, equality, democracy, military governments, and dictatorships—as developed in our contemporary nations.  National identity is predicated on commonality and purports to be a unifying force; but the solidarity and sense of belonging that nations make possible can also become a source of cultural division, social exclusion, and violent conflagration. 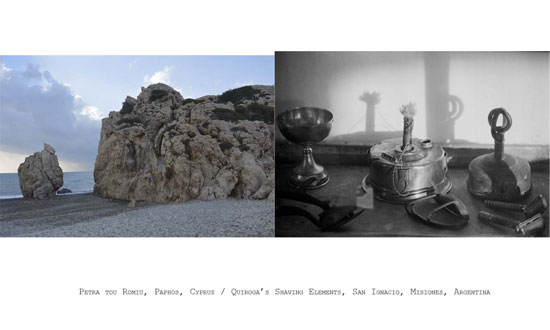 The City of Paphos and the Land of Quiroga in Misiones, Argentina, although seemingly distant, are drawn closer together historically and culturally when the dual consciousness proposed by Puntos and Cardillo is evoked. While looking at their cityscapes and landscapes, past and present become interconnected, while our awareness of the duality of space and time is heightened, inciting us to question our sense of belonging...to a specific time, place, or people.